You CAN get there from here

Hands up if you’ve ever heard this one:  “You’re either born with artistic talent, or you’re not. It can't be taught.” Or the oh-so-encouraging followup "and you weren't born with it, so just give up now."
Yeah. Me too.

And they're wrong. It's not magic. Drawing can be taught, and learned.

I've had a lot of very kind comments lately about how much my drawing has improved over the last year and a bit. And you know why I've improved? I've learned.

That's right. I am LEARNING to DRAW.

I wasn't "born with it," so I guess they were right about that. I just didn't let that stop me. I went to school, and kept at it until I found someone who didn't buy into the whole "drawing can't be taught" nonsense.

I've had some lovely and well-intentioned comments from friends about how talented I am. Truth is, talent has nothing to do with it, other than the talent to be too stubborn to quit. Once in a while, someone says they wish they could draw like me. Tell you what, kids, I didn't get this way by wishing. Like the cliche says, it's 2% inspiration, and 98% perspiration.


Find a good school, with faculty whose work you respect. Pay attention to the instructors. When they point out an area where you maybe need to pay a little extra attention or put in a little extra work, don't get offended and pitch a fit. Put in the extra work. If they point out an area where you need to un-learn some bad old habits that are keeping your drawings from being as good as they could be, don't take it as a personal insult. Listen to them, and apply what they say to your next drawing. 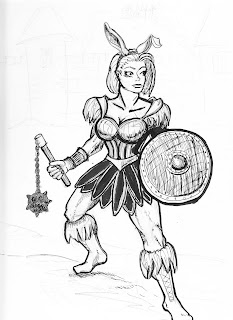 I try to reinforce the new good stuff I've learned, and watch out for the old mistakes and bad habits. If a sketch doesn't turn out, I study what might have gone wrong with it, and draw corrections on it so I can do better next time. If I couldn't figure out what went wrong with it, I ask for help or advice or a critique from someone who I can trust to give honest and contstructive feedback. If a sketch does turn out, I don't take it as a sign that I can let my guard down.

Most of all, I park my butt in a chair and practice every day.

It's not magic, and it's not talent. It's work. At the end of the day, ANYONE can learn to draw at least as well as I do, if they want it enough to put in the hours.

So there you have it: If you wish you could draw, pick up a pencil, and just start drawing. And don't stop.

Posted by Unknown at 9:05 PM No comments: Links to this post

A new way of seeing the world

The other week, I took some vacation time from my day job at the bank to go to the Toronto School of Art for a three-day, full time intensive. This turned out to be a really, really good choice. Exhausting, but good. The workshop was Structural Bodies taught by Thomas Hendry, and it had the specific focus of giving depth and dimensionality to drawings.

Which is handy, since the lack of dimension has been consistently one of the biggest flaws in my drawings. 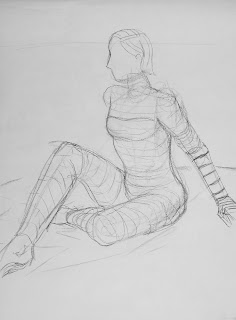 The first day, we had a model who wore black and white stripes pretty much from head to toe. Leggings, leotard, even stockings on her arms. This was super helpful. Instead of having to imagine the direction a cross-contour line would take, it was right there in, well, black and white. Seeing it, for the first time, I understood how to use cross-contours to indicate direction. I had managed this before in my drawings, but only inconsistently and by fluke. Now I know how to do it intentionally. So, if you're having a hard time figuring out which way to put a curved line, try wrapping some string around a drawing dummy, and posing it.  I know that's what I'll be doing the next time I get stumped. 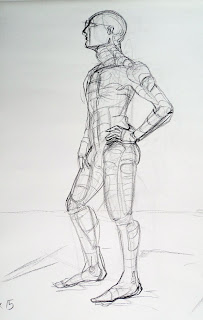 Having finally gotten a grasp on how lines convey direction, I worked really methodically for the rest of the intensive.  Because this was a new technique for me,  the process was more important than the end product. Slow, repetitive and intentional practice is the best way to reinforce something you're just learning to do. Worry about the process, not the performance. It's like practicing scales on the piano. Study them mechanically so that you can use what you learned to support something more expressive later on. But you need to have the technique down before you can use it.

Part of my approach was to actually draw the eye line on each piece, rather than assuming I'd remember or know where I meant for it to be.  This helped when I was trying to figure out if something was coming toward me or moving away. So I did a quick study of the main masses of the body, and then went back in and refined where there were smaller masses and forms of the individual muscle groups. 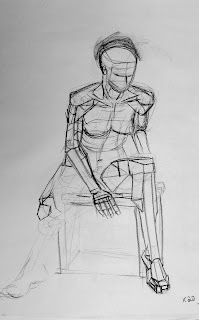 After spending a couple of days doing this, I got what was, for me, the real "eureka" moment: I was able to see the planes of the figure.  This was huge. I'd attempted planar studies before, but was never able to figure out what I was looking at, or how to express it on paper.  All of a sudden, I could see the block shapes and round shapes. I'd read Bridgman, of course, but had never understood what he was talking about. And then, I did. It was like a Matrix switch got flipped somewhere in my head, and I could see the edges of planes, and the block shapes. It's a little trippy, because I see them all the time now, little fractal lines on everything I look at. It's a pretty big shift in perception, and I'm still figuring out how to process it.

So, if you're anything like me, and you find the anatomy and figure drawing and life drawing reference books confusing and intimidating, don't let it stop you. Copy the drawings from the book by rote until you understand them. While you're doing that, draw from life every chance you get. And at least once in a while, don't be afraid to make a mechanical, methodical study instead of a work of art.

You never know what it can lead to.
Posted by Unknown at 1:10 PM No comments: Links to this post