What I'm learning at school


Well, I've realized one thing this week: class on Wednesdays and Thursdays does not make mid-week blogging very easy. I will probably move my blogging day to the weekend during the rest of the term. We'll see how it goes, part of it has been my previously-mentioned volunteering at TIFF and subsequent battle with the Flu of Doom. And now, of course, fiscal year-end at my day job is kind of eating my life. But I still have been drawing, in spite of all that, even if pretty much all of my drawing lately has been school-related.

Here's something I finished this week, we had an assignment on facial expressions the other week, which I did rough blue lines at the time and then this past week I inked it. I was experimenting with different tools and techniques rather than going for a consistent style through the pages. I meant to trace a head and then use a lightbox to keep the head sizes consistent at least, but I forgot to do it, so the original is a bit wonky. This version has been edited a little in Photoshop. I'm happy with both characters' acting, anyway, which was the point of the exercise. There's no need to guess what either of them is feeling in any frame, I don't think. 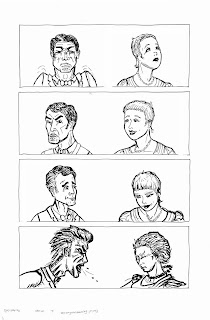 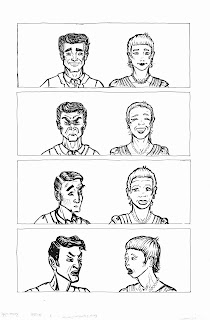 This one here is an in-class exercise we did the other week on expressing emotion. The emotion was sadness. Sure this comes out more angsty than sad, but it gets the idea across. I drew a quick pencil sketch at class, then inked over it and cleaned it up a bit when I got home. This is 100% made up, no photo reference or model or anything like that, although I did take the pose a couple of times myself and then drew how it felt. So of course, the light source is also invented. I kind of like how it turned out.

For the next (and final) week of this class, there's a three-page story to draw. So, chances are next week's post will be about the final versions of what's showing in these rough layouts. Sneak preview, much? 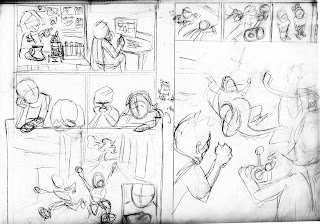 That's all I've got for now. It's time to make with the drawings.
Posted by Unknown at 7:58 PM No comments:

Well, between TIFF and the epic flu I got after TIFF, and the two drawing classes I'm taknig at Toronto Cartoonists Workshop, my blogging schedule got pretty messed up. Hopefully I can get back on track now.
Most of my drawing lately has been course-related, class exercises and stuff. (We won't mention either of the 24-hour comic attempts, which resulted both times in way more sleeping than producing.)
But I have been working on some character designs for some female characters. It started with the cowboy story. I still didn't have a visual on the female lead in that one, and was having a hard time getting to the script without knowing what the character looks like. All I had was that I knew she was a scientist/inventor and smarter than the rest of the characters put together, and the cowboy is still in love with her.
When I was trying to come up with a concept, other than the above, I thought to myself, "OK, I have my hero, I have my sidekick, now all I need is my steampunk vixen."
Light bulb.
Steampunk vixen?

Yes, please! That needs to be its own series.That is absolutely something that needs to exist in the world. 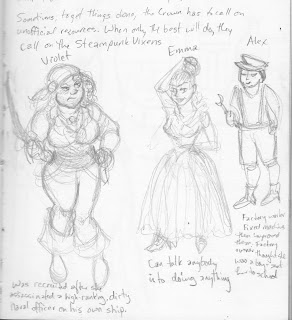 And you know what's better than a steampunk vixen? Naturally, three Steampunk Vixens! A pirate, a courtesan, and an engineer. It's like Charlie's Angels meets Jules Verne. And I can't wait to draw it. I'm plotting out some of the character background/origin story points for issue 1. Now all I need is some help from smarter people than me to write the rest of it, especially the engineering science-y stuff.
This won't be my first project though. I want to have some practice before I tackle it.
Speaking of which, OK I will mention the failed 24-hour comic attempts. I'll still do the story because it's kinda fun. At least I think it is. I just won't do it in 24 hours, that's pretty much a given at this point. It'll be good practice at drawing, even though the whole deadline thing didn't work out so well for me. I don't have any visuals on it yet, but I do have an outline and am partway through a page breakdown. (Yeah. two tries at it and I only got an outline and partway through a page breakdown. I had the flu, OK? I thought I was better the week after but I really wasn't.) 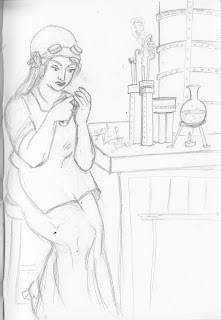 I'm also going to do the cowboy story. I did finally get a visual on the female lead. I know the perspective is all wonky in the lab equipment in this sketch, and the verticals aren't quite vertical. I'll do up some proper drawings of her, and a character sheet for her.
In the meantime, this is a rare instance of me making a drawing and liking it right away. I usually hate anything I make until at least the day after I make it. I've actually had to make a rule with myself that I can't throw anything away the day I make it, or I'd never keep anything.
This one, though? This one was a keeper from the minute I set down the pencil. Hello, Trixie. Nice to see you.
Posted by Unknown at 7:00 PM No comments:

OK, my participation in the official 24 hour comics day was a flu-induced train wreck. Now I am flu-free and full of caffeine, and ready to make another go of it. Will I succeed? only time will tell...
What I have so far, my list of "audience suggestions" from the fabulous Infinite Improbability Drive widget at the H2G2 Wiki site:

and the resulting story thread so far:

There is a rivalry between Farmer Brown and Old MacDonald.
Old Mac has one of every kind of animal. One, very virile male of every animal, and a successful stud service. Old Mac is an animal pimp. He also has a kid at CERN, who has managed to detect and harness the
elusive Higgs boson. Because of ...this, they have pimped up their ride (tractor) and can control its mass, which makes it nigh-on invincible at the tractor pulls.
Farmer Brown, he has a dog. Of course. He also has a boutique organic produce farm. And he has a secret weapon...

I will continue to incorporate as much of the original suggestion list as I can, and post the results to my DeviantART gallery at http://rockie-squirrel.deviantart.com/
Posted by Unknown at 5:26 PM No comments: