A while back, on what was practically a dare from a friend, I applied for a table in artist's alley at the Toronto ComiCON.

And then, to my utter astonishment, I actually got in.

So, March 10-11 I'll be at table A51, with some prints and some artwork, and doing some sketches.

I figured that I would do up a special print for it, and throw in some local flavour. 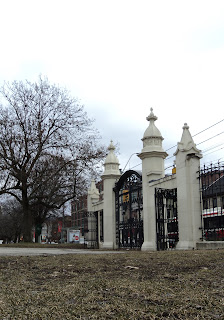 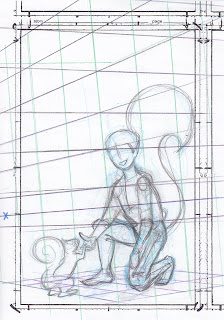 So, if you're from Toronto and really, really nerdy you probably know where I'm going with this.

Other than that, here's a couple of other things I've got on hand. 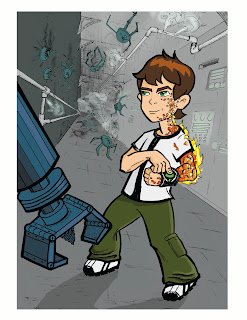 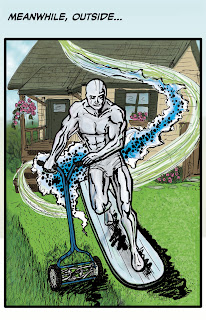 So, here's me. Taking a deep breath and taking the plunge. Wish me luck.
Posted by Unknown at 4:30 PM No comments:

So, there was some friendly smack talk over at Outcast Studios discussion boards, and now I've gotten myself signed up for Battle Artist on deviantArt. I guess I'm just a sucker for punishment because I'm out of my weight class going up against pretty much anyone else on the roster. But it's fun, and there's no particular shame in being 0 for 2.

The topic of the last battle was Ben 10, and we had a week to work on it.

The first thing I did was rent a DVD so I could learn what Ben 10 is. I'd heard of it, of course, because I haven't been living under a rock, but I'd never seen it. Incidentally, I will never get that theme song unstuck from my head now. I started out by filling out a couple of sketchbook pages while watching the show and getting an idea of the character.

While I was doing that, I also started working out what my own drawing was going to be about. 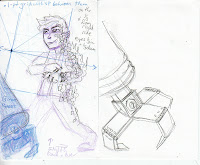 I set up the composition on a simple, one-point perspective with the convergence point between Ben and his giant robot opponent, so that the piece is about the tension and the fight about to take place. Then I did a little design work on the giant robot arm itself so that I had a reference for it. These were done on a wee, 3x5 sketchpad during intermission at a concert. Because I like drawing, but I also like Beethoven. 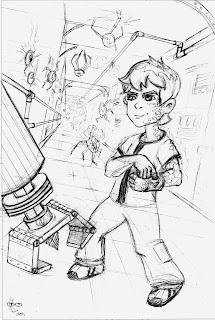 I was happy enough with this sketch that I developed it a little more than I would usually do for a thumbnail sketch. And because the perspective is pretty straightforward, I skipped right to building a grid and rough construction on full-size comic board instead of making an intermediate construction and blowing it up on a copier. I forgot to scan that stage, though.

I added enough detail in the background to give a sense of location and what had happened up to this point in Ben's day, and checked that the composition still had energy to it. It still goes in a spiral, coming in down the robot arm, going up the black stripe on Ben's shirt, and then back down the pipes leading down the corridor, and even though the robot is closer to us and on the left hand side of the page, Ben is dominant, so it does what I intended.

I only sort of know what I'm doing with inking, but I managed to get some fairly clean lines down for this one, especially by my own standards. Looks like that inking class I'm taking from Ty Templeton is already paying off, halfway through.

And then, because I still had a day or so before the submission deadline, I decided to try doing some colours. I let the background be fairly dark and desaturated, so that Ben would stand out more.
So there you have it. That's how I throw down at an art fight. 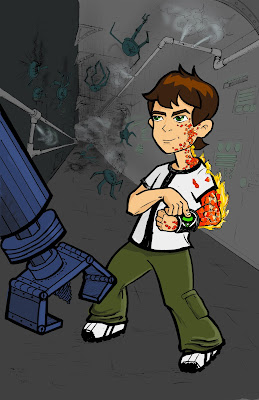 I still lost, of course.