Okay, yeah. I didn't post the other week. This is mostly because I hated every single mark I put down on paper for a couple of weeks running. There was a final assignment for my class up in there, too. Loved the class. Hated my last drawing. I showed it to my teacher, but only because I had to.  I tried to weasel out of showing it in the class. But it's over and done with now.

Here's the thing. Sometimes drawing goes like that. When it does, you just have to plow through it, make a bunch of crappy, stiff, awkward drawings and throw them in the fire. If you've done a lot of drawing, you know what I mean. If you're just getting started, then just know when it does happen to you (and it will), it's not the end of the world, and it's not worth pitching a fit over. It's just the drawing equivalent of "no pain, no gain." And it's probably not as bad as you think.

I find it usually happens to me when I'm trying to process new information, and with the classes I was taking there was a whole lot of new information to process.  Yeah, it happens often enough that I've detected a pattern. It just takes a while for the hands to catch up with the brains, especially if the hands have been used to doing things their own way for a while. The good news is that if you keep persistent then the motor skills do catch up. And by the way, don't throw anything in the fire right away, because if you set them aside for a month or so and then look again, you just might see your learning curve.


So, of course, right after this I jumped into the arena for artist Battle Royal over at Outcast Studios. I knew that I'd never make it out of the first round, but that wasn't really the point.

I had picked She-Hulk as my character for the fight, and with the luck of the draw got thrown up against Lobo. With that being the case, I figured it would be a hand-to-hand combat situation. I checked out some photo reference for martial arts and MMA and started doing some quick gestures on 9x12 sketch paper. I found a pretty good photo of a throw, but once I'd gestured it out, even though the mannequin matched the photo, it felt like my lady's pose was a little too scared. It looked like she was defending against a leap, rather than following through on a throw. So I thought about baseball, and came up with a pose I was happy with.


Once I had the main characters' poses figured out, I settled on a camera angle that I thought would work. I figured that since Lobo is pretty bad news in the DC universe, if he showed up in the Marvel universe, it wouldn't be a girl fight. A guy that has killed off his whole planet would pretty likely get all of the Avengers involved.

The official tournament rules specifically stated that any Avenger could call in the whole assembly.  As previously mentioned, I knew I would only have one shot at this, so I figured I'd go crazy with it, and do just that, and throw down with as much of the core team as I could recognizably fit in there.

While I was roughing out, I realized that I had the storytelling backwards, so I dropped the drawing on a lightbox and did a quick trace job to reverse the layout so that She-Hulk would have the dominant spot. Even though she's farther back, and therefore smaller, she's on the left hand side of the page, which gets her noticed first by most people who follow the Western alphabet.

I plotted out the perspective grid with careful math and geometry and stuff, with the convergence point just under She-Hulk's knee, and arranged all the other page elements so that they were either moving toward her, or looking at her, or in Lobo's case, moving away from her. But she's still the center of gravity here, and the story of the page is all about her.

Once I finally got all of that sorted out, I went to full-scale 11x17 comic art board.

Right about there was where I decided to play to my naturally cartoony drawing style. Then it got silly. Here come all the Avengers, all geared up for a big battle, and it turns out to be nothing. Squirrel Girl came out a little more sinister than I intended, but it's all in good fun.


Of course I did not win the art battle. But I drew something I don't hate, and that's worth something.

Posted by Unknown at 8:57 PM No comments: 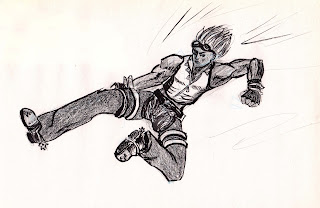 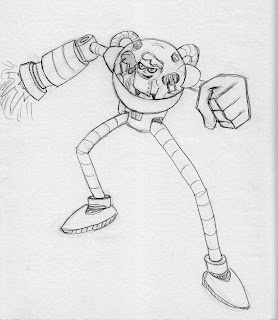