I like to go to proper classical life drawing sessions, but sometimes it's fun to just kick back and do something different. Being in Toronto, I'm lucky enough to have some options available to me.  One of them is the Toronto branch of Dr. Sketchy's.  The poses are short, the models are burlesque dancers and the like, so there are fun costumes to work with, there are contests during the session and there's always a fun playlist to work to. Also, it's at a pub so you can have a pint or a cocktail and chat with your friends between poses.
For one reason or another, I hadn't been able to go for a long time, so it was fun to get back to it the the other week. The model was Mena Von Fleisch, expectant with twins, and she was fantastic. I did some drawings that turned out okay, and generally just had a great time.

Speaking of contests, here are my contest entries from the night.

The first  one was a one-minute pose that I tinkered with between poses and between sets, and I submitted it at the end of the night as my "best of the night" entry.

The other one was a five-minute pose, with an additional three minutes to come up with our best incorporation of a monster. I was just happy that the monster was recognizable enough that I didn't have to explain who it is supposed to be. And it got some applause from the crowd, which was nice.


After I got home from the session, I uploaded these drawings to the Facebook group page for Dr Sketchy's Toronto. The model liked them, and tagged herself, which was also nice.
A few days later when I tried to connect to Facebook I had about eight warning alerts that I had violated the terms of service for Facebook by uploading offensive material.  Both drawings were deleted by the Facebook admins. As near as I can figure, the perceived nudity is what set someone off and got the drawings reported. (For the record, the model's costume included sequined pasties, so technically there is no nudity here.) 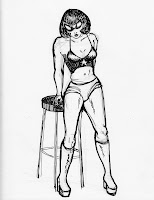 Keela Watts, the model at the following session, was generally less threatening to those with easily offended eyeballs.  Her costumes covered the more alarming body parts, at least.

The model was great, had a fantastic and charming energy, and the session was a lot of fun. 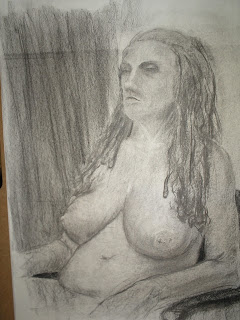 Here's the really interesting bit. I've been doing life drawing for a while (like, years) and have uploaded my work to my Facebook photo gallery before this with never a batted eyelash. For example, these drawings here, with actually nude models had been up for a year and a half. 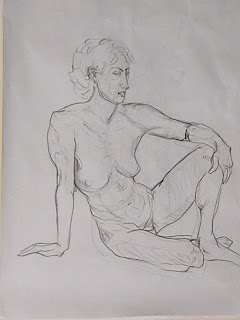 I've taken them off my Facebook life drawing gallery now, so they just live here on my blog or over on my deviantArt gallery.

Personally, I don't get it. The human form is marvelous and complex, and I don't get how creating something that shows that would never be perceived as threatening or offensive. But there are a lot of things about the world that I don't get. But I guess that's what makes me so darned controversial.  Imagine that! Little old me. I guess now I'm a real artist.
Posted by Unknown at 6:47 PM No comments:

That went longer than planned, but better than expected

I finally finished my three-page narrative assignment for the expressive anatomy class. Only two weeks late. Too much going on at my day job and in my real life. Also, I came down with another dang flu bug. (Really, immune system? Really?)

Page one was actually done on time, although I decided later that the decision to have Sally's hand outside the panel border and her cape inside it was a dumb one. The drawing doesn't make sense, so I tweaked it since then.  She's more legitimately flying into the story now.
We had some time in class to work on the rest of the pages. Unfortunately, page 2 didn't turn out as well. Even while I was working on it, I realized I had totally misplaced the video store, which is only the most important element on the page, when I was plotting my layout. It ended up way too far to the left hand side, almost into the bleed, and it was too far in the distance and therefore too small. Also, one of the narrative elements I planned for the panel was to put a hipster taking a video of the Godzilla attack with their iPhone because that's the kind of thing a West Queen West hipster would do when faced with a Godzilla attack. But the only spot I had for it in the composition blocked the already obscured and too-small video store. So between that and the stuff in panels 1-3 that didn't thrill me, I had to redo most of the page. I worked out the frustration over this by drawing a hooker on fire and a naked guy running in the other direction with his junk flopping around* because I knew I would be scrapping the page anyway, and because hey, let's face it, this is Parkdale**.
(*junk not actually drawn to a level of detail that is easily identifed, but I'm sure you can use your imagination. **not quite Parkdale, which starts a few blocks to the west.)

In the end, I went back to my friendly local independent video store, and took some more photo reference so I could put it more into the spotlight, and also give the last frame some better context and a bigger reaction, based on feedback I got from the instructor on the first draft.  I shot it from a low angle, because the idea of the boy mirroring Godzilla's pose in panel 3 with his own triumphant pose in panel 4 made me smile.  And while I was doing the extreme page 2 makeover, I fixed the wonky perspective on the backgrounds in panels 1-3. And I gave Sally a better science station. And I threw in a CP-24 news helicopter because it seemed like a good idea. And it's hard to tell from this, but I tossed in a DNA ladder on the bulletin board.

The fact that Godzilla seems to be squishing my other school here is completely unintentional. It's just collateral damage based on where the video store is. 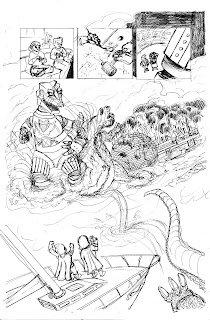 And, here's page 3. There aren't draft versions of this, because I mostly just worked in non-photo blue and did a lot of erasing. I'm more or less happy with how it turned out, but I'm going to lose all the heavy black up top behind panels two and three. I was torn for a while between having the fight take place at the CNE grounds vs. Ontario Place. I picked the more useless of the two to take the hit. So yes, this one was squished on purpose. If anyone from Ontario Place sees this, I can only assume you'd side with me on this one.

Even considering the mistakes I made along the way, I'm surprised these pages turned out as well as they did. Maybe I'm starting to get the hang of this whole drawing thing.
Posted by Unknown at 8:48 AM No comments: