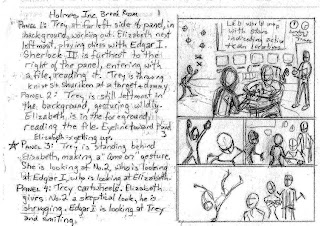 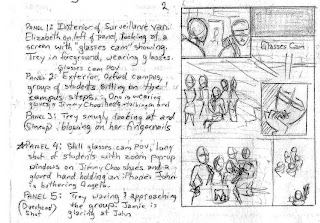 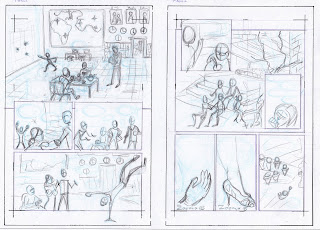 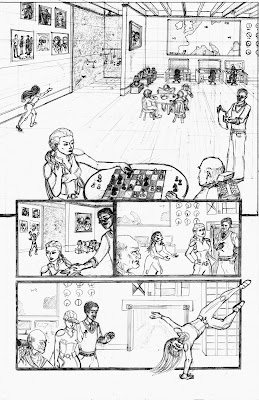 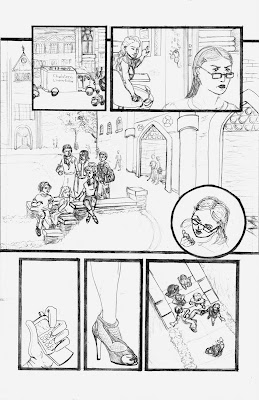 That's kind of all I have for now. My mind is still a little blown.
Posted by Unknown at 6:06 PM No comments:

Getting to know you

I'm working on getting a feel for the characters in my story so that when I get to actually writing I'll know who they are a bit.
So now, for starters, knowing how a guy carries himself, and how he dresses, goes a certain distance to knowing what kind of a person he might be. I'll refine the designs as I develop the characters further, and I've drawn both of the main charcters too short here, but again it's a start.
The younger cowboy here has a casual, but prepared for a fight stance. So we can assume he's a bit brash. He's got a lasso but no gun so he's either Canadian or has recently spent time in Canada. (it's the latter.) He's generally clean, but in need of a shave and a haircut. I drew him that way because he's been on the run for a while.
The bartender doesn't count for much, because he's just a piece of the set. But if you look closely you can see where I drew his whole figure, behind the bar, to check my proportions and where the floor would go. I generally do that with my drawings anyway - include the bits that are behind other bits when I'm doing my initial sketches. Doing this helps me give a three-dimensional feel to the drawings.
The older guy, taciturn, grumpy, kinda stiff (stiff cause of old injuries, not cause of him being stuffy). I'll make sure he keeps the guarded body language and the big, old-guy ears when I do the design tweaks that this guy will need before I start drawing the pages.
I started a rough drawing of the lady in the book, but it turned out looking too much like Elektra so I scrapped it. I definitely have to get that stuff locked down soon, though.
I'm kind of working on the story outline and character designs at the same time here, because each one informs the other.
So, that's where we are this week. It's time to do a bit of writing so I'll have stuff to draw, and at the same time to do a bit of drawing so I'll know what to write down.
Posted by Unknown at 9:23 PM No comments:

When I'm working on my own stuff, as opposed to drawing something that someone else wrote, I tend to come up with bits of everything at once, so putting down some quick thumbnail sketches helps me focus, and figure out the story beats. At this stage, I'll make notes about what the scribbly lines are supposed to be, and jot down dialogue ideas if I think of some. I don't spend a lot of time on these, and don't worry about how messy the sketches are. At the thumbnail stage, I'm only looking at the story pace, what the beats are, and how much of the page each story beat will take up. It's a rough draft, with some rough draft notes. And having had a look at it, now I've realized that I'd like to move the two-page spread back a couple more pages and let the bar scene play out a little, and give the otters more time to get from the river to the town.

I figure I'll keep the nice, slow mosey pace going so that when the were-otters turn up the slam into action is more deliberate and more exciting. The story beats on page 3 will be spread out across the two new pages.
Moving on to the rough layouts, where I start putting some thought into panel and page composition, and camera angles. Page 2 here is pretty much the way I'm going to draw it. 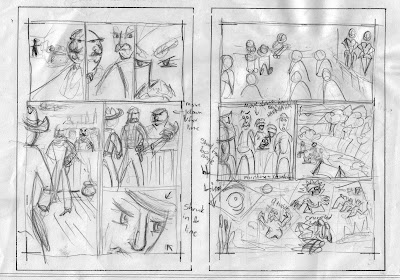 Page 3, panels 1 and 2 won't change much. The rest of the page will be completely different. I'll add in some more info and character stuff on the rest of the page. So far, one of my favourite dialogue lines I've come up with will go on the last panel of page 2 and the first panel of page 3. It's my favourite because it gives all the back story you need to know in three sentences.

Chet:  I never stole them horses.
Hank: The whole rest of the county was down to the chapel, Chet. Trixie will never forgive you.

Bim, bam, boom, and on with the current story. As soon as I get the rest of the plot points figured out.
Posted by Unknown at 9:40 PM No comments:

There's a contest for this?

Here’s the thing. Someone out there on the interwebs saw my sketch of Captain Canuck that I did for Canada Day and has invited me to compete in their Captain Canuck art contest.
Kinda cool, right?
Of course, I’m not going to compete using the drawing they saw. It's just a silly little sketch I did for a lark because it was the most Canadian thing I could think of doing with my spare time on July 1. Fun, but not the kind of thing you'd enter in a contest. (It’s posted on my gallery page if you want to see it. It’s really, really Canadian, eh?)
For my competition piece, I wanted to go with something action-y and dramatic, so I’ll be drawing the moment when Captain Canuck realizes that his partner, Blue Fox, is a double-agent for the communists. (Hey, it’s from the 1970s. A lot of villains were communists.) I’ve got the rough layout done on 9x12 paper, and am pretty happy with the basic poses.

This week I'll be drawing the same layout onto full scale paper and planning the composition and environment around the poses.  I’ll use the other elements on the page to direct focus to the captain’s face, and hopefully will be able to draw an appropriate sense of betrayal and drama in his expression. We’ll see how it goes.

Check out the contest at DeviantArt. It’s open to entries until August 15.
Posted by Unknown at 8:06 PM No comments: