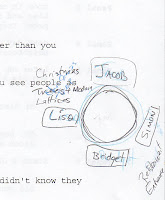 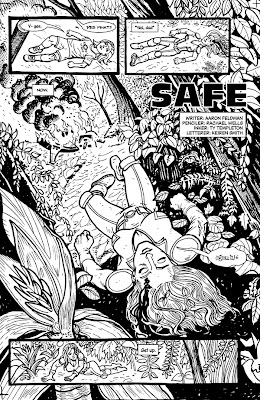 I wouldn't blame you for thinking that these credits are some kind of fangirl fantasy. But it's not. They're real, and they're in print.

Check out Ty Templeton's blog for more preview art and other awesomeness.
If you're in Toronto, and it's still before evening, you can come to the Toronto Cartoonists Workshop studio and check it out in person.
TORONTO CARTOONISTS WORKSHOP
587A College Street (Upstairs unit, College and Clinton)
If not, you can watch the Holmes Inc Comic site for how to order a copy in print or online.
Posted by Unknown at 5:25 AM No comments: 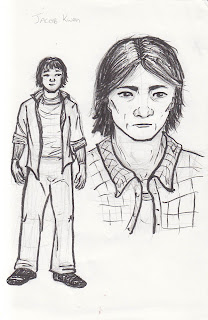 The Toronto Comic Jam is doing another issue of Grawlix, and I'm doing a story for it.

I've got some basic character sketches down, not so detailed as my character reference for Holmes Inc, but this project has a much faster turnaround so I'm doing the best I can in the time I have. At least I have something I can pin up for continuity.

I used a brushpen on these. When I finish my pages for the book I'll probably use markers, what with my not having refined enough motor skills to use the brush. Yet. And it'll be a challenge enough trying to get the concept of inking down without having a tool I can't fully control.

I'm actually writing the story this issue, which is a new adventure for me. Sure, I've written stuff before. There's all these blog entries, of course, and I've written some short stories,  but this is my first comic script. Fortunately for me, I got some help from Holmes Incorporated writer Dino Caruso (you can check out his tutorial on short fiction on the Holmes Incorporated site.) 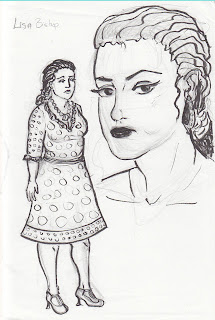 The subject matter of the story that I'm telling is a bit personal and uncomfortable (to the characters, not to me and hopefully not to the reader) so I'm keeping the pages on a tightly composed grid structure so there's something to provide a safety net. I'll be shooting it basically like a documentary, with predominantly mid- to close- shots to keep it intimate and personal.


I'm trying to keep all three characters sympathetic, just three people in a bad situation but nobody is "the villain" because it's an everyday story with ordinary people. Again, we'll see if that plays out. Obviously, anyone reading the story would relate to one character more than the others, and have a favourite by the end, but I've tried to give all three of them a reason why you'd like them and a reason why you wouldn't. After that, it's your call as to who is the most to blame for what happens. 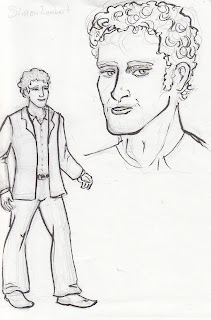 At least that's the idea. We'll see if it plays out.

One thing about being the artist as well as the writer, I am putting less detail into my script than I probably would if I was handing it over for someone else to draw, because I already have the picture in my mind I don't have to write it down in the script. So my script is pretty sketchy, but I know what I mean by it.


And being the writer as well as the artist, if when I start drawing I decide to go another direction, I have the freedom to just run with the change because I know the writer won't object. (Or if she does, may need some professional help. But that's another topic for another day.)


So, there you have it. My next project, my next challenge. Now all I have to do is meet the deadline.

Posted by Unknown at 7:34 PM No comments: 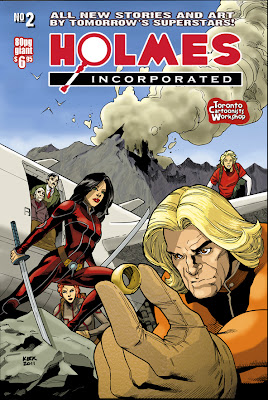 After months of collaboration, and learning, and abject panic, Holmes Incorporated issue #2 is set to launch on Friday, July 22.
Working on this project has been terrifying and rewarding at the same time, and I can't wait to see the finished product.
If you happen to be in Toronto, please feel free to come by the school/studio space and say hi!
http://cartoonistsworkshop.wordpress.com/2011/06/29/weve-moved-open-house-and-holmes-inc-2-launch-party-on-july-22/
If not, you can check out the Holmes Inc Comic site or follow Holmes Incorporated on Twitter http://twitter.com/#!/holmes_inc for announcements about getting the book online.
Posted by Unknown at 5:42 PM No comments: